The threats posed by climate change to biodiversity from a rapidly altering climate are considered to be enormous. Our current knowledge of ecological systems and biodiversity are insufficient to anticipate exactly what impacts climate change have upon biodiversity and how we should best manage landscapes for maximal biodiversity outcomes. This project had the ambitious aim of developing models to help understand the possible impacts and risks to natural ecosystems from a changing climate, and how these changes may manifest across Victoria, particularly for regional and local landscapes in central Victoria. The work was primarily funded by the North Central Catchment Management Authority.

The study integrated data on plant species’ distributions and environmental data that are important drivers of plant species distributions.  We constructed probabilistic models of current and future distributions under a series of climate change scenarios. Maximum Entropy models for 15 different tree species that at least partially covered the North Central Catchment Management Area were constructed for the three separate warming scenarios of different intensities from the 3rd IPCC for three future time periods (epochs) — 2030, 2050 and 2080 — as well as for the ‘Current’ model.  Species were selected as structurally dominant representatives of five major vegetation forms or ‘biomes’ (Mallee, Semi-Arid, OpenForest / Woodlands, Forest and Floodplain) that cover large parts of the study area. Biome models were also developed from aggregated distributional data of the tree species. Mallee and Semi-Arid Woodlands are at the edge of their continental range within this study area, and it is these boundaries where initial and most demonstrative climate impacts are likely to be seen.

Models developed for ‘current’ species / biome distributions generally demonstrated high levels of statistical performance and ecological integrity. Examination of the future scenarios suggested major range shifts for some biomes over the 80-year sequence. A common response was a general decrease in the likelihood for the biome to be present at any particular location over time and with increasing severity of the climate scenario when compared to the ‘current’ model. 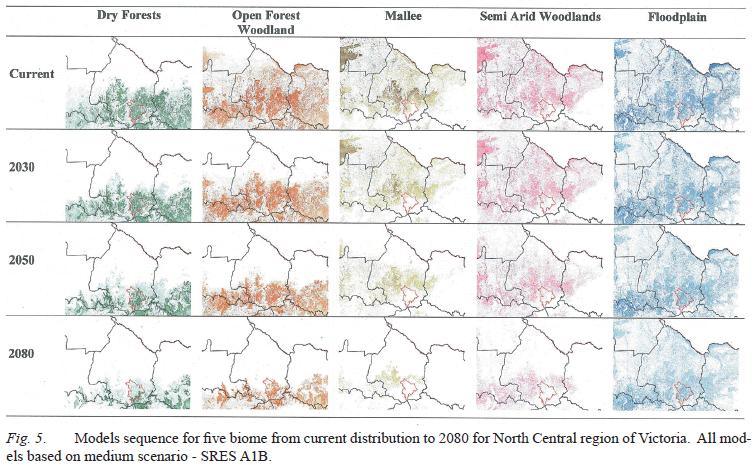 While the general pattern of results appears to be consistent with general ecological principles, there are several caveats need to be considered when evaluating these results.  These critically include our inability to accurately predict the future.  Part of this lies in the difficulties associated with ‘zooming in’ from global, regional and landscape scale models to interpret these coarse products at the local scale. Despite these and other uncertainties and caveats limiting the interpretability of the results, these temporal biome shift models may be useful in assessing the future of native vegetation in landscapes when considered more generally.

The management implications from these analyses are that there is no single obvious ‘solution’ such as a single large ‘corridor’ that would minimise risk to native vegetation systems in these study zones.  Additionally, many of the factors already impacting upon biodiversity (habitat loss and fragmentation, declines in native vegetation condition, salinity, weeds) are unlikely to decline.  Climate change is likely to exacerbate these existing and well-known impacts in a synergistic manner, rather than simply generating a single new stressor that impacts upon species and biomes. A broader reflection of these results suggests that there is a significant risk of failure in decision-making and ultimately in conservation outcomes when ‘second-guessing’ the direction and amplitude of environmental change while not addressing these current threats.

While scientists and policy makers would like to understand our natural environment at local scales where appropriate management can be applied, current technologies can not always provide the answers to these questions. The nature of cause and effect relationships in natural systems is extremely complex and often non-linear. While tools for modelling ecological systems are improving in their level of sophistication, they are too crude at present to predict the future with certainty. The tools and mechanisms used currently by land mangers for biodiversity conservation are simplistic in some respects, yet arguably can be very effective for current conservation actions and possibly also for ameliorating the impacts of climate change. However, at the current scale of their application they are unlikely to be very effective without significant increases in the intensity and spatial extent of these activities. While new management tools and strategies are required and may emerge in the future to address the impacts of climate change upon biodiversity, it would be foolish to wait inactively for these while current knowledge and insights may provide the best prospects for conservation efforts.

Reports from this work can be found here, and a synthesis discussion paper on climate change issues was published in Ecology and Society in 2010.