This project aimed to protect and assist recovery of native fauna by reducing the impact of introduced red foxes in fire-affected areas following the 2009 bushfires (the red areas in this image) which burnt more than 400,000 ha over several days in early February 2009.

The full technical report of this workcan be accessed here.

A major outcome of the project was the development of a framework for applying an evidence-based method for identifying strategic areas for on-ground works using Species Distribution Models (SDMs) of fauna species that were both susceptible to predation and present in the fire-affected areas.

The framework involved engagement with regional staff and species experts to identify 145 likely target taxa. SDMs for 126 of these species were available from our prior work.  Fire severity mapping developed by DSE provided a basis scoring the differential impact of the fire across the landscape based upon crown scorch.  This severity model was used to degrade or de-rate the habitat for each taxa across the landscape, providing us with two separate datasets (i.e. a stack of 126 SDMs): one pre-fire and another post-fire.

Each of these data were submitted to Zonation as two independent analyses to rank the landscape in terms of its relative value for those taxa before and after the fire.  The outputs from these two analyses were then compared and considered at scales relevant to the control of foxes (generally ~ 10 km2).

Importantly this process could be applied equitably across all instances and intensities of the fire affected areas to identify those locations that were most likely to benefit from predator control.  Fox control was implemented at four fire areas — Beechworth-Library Road, Kilmore East-Murrindindi, Bunyip Ridge, East Tyers-Thomson — covering 295,985ha. Some 15,092 baits were deployed at 4,074 bait stations of which 3,094 were taken. Contractors, under supervision, undertook the work 19 months after the fire event.  This process identified the eastern section of the Kilmore East–Murrindindi Fire Complex as the prime location for control efforts for Red Foxes and associated monitoring and evaluation. 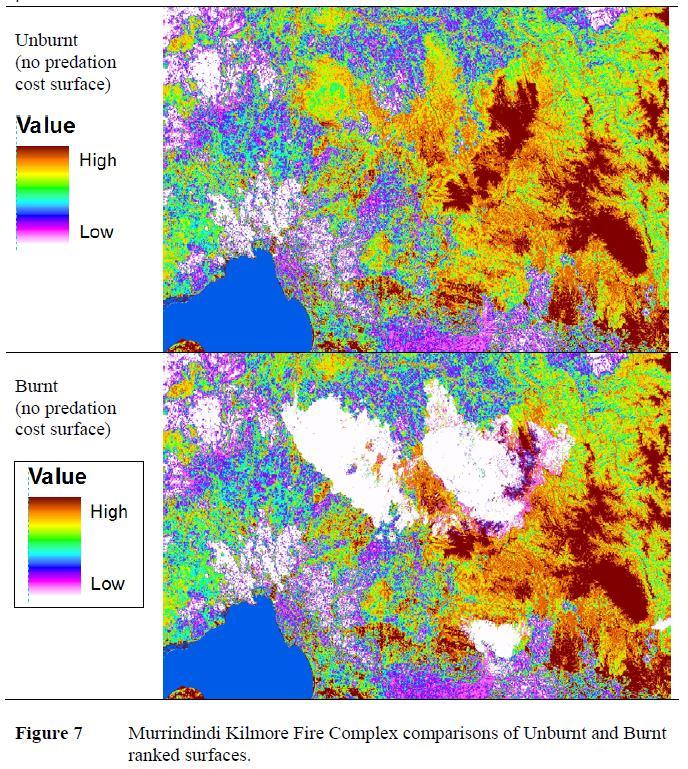 The important lessons from this short project include:

2) while models for animal species susceptible to predation were useful, models of the primary predator (red fox) were not as useful in prioritising predator control efforts.  Poor discrimination in the model of distribution of red foxes led us to assume for the purposes of this project that they had an equal probability of occurrence and equal abundances across the whole landscape.

3) the approach identified locations that had high biodiversity values that were only moderately impacted, and were adjacent to unburnt areas that may assist in recolonisation.

4) while regional staff have been reluctant to previously engage with sophisticated spatial models and complex modelling routines, they could appreciate and engage with the logic and approach taken with this immediate problem.